Burnt by Sun and Flame 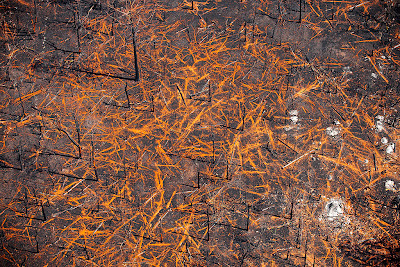 John Gollings www.gollings.com.au/ has an enviable reputation as a fine architectural photographer and also an acute observer of the Australian landscape - both urban and rural. Recently Gollings re-photographed Gold Coast vistas he had previously documented dedades before - with telling results. Now Gollings, in a new exhibition at Edmund Pearce Gallery www.edmundpearce.com.au in Melbourne, has observed the elapsed effects following bushfires - creating highly graphic black and white  and colour images that suggest both the terror that must occur when fire sweeps through the country - but also, ironically, fire's other role in effecting the land's renewal. In a perceptive essay in the exhibition catalogue Monash Gallery of Art Director Shaune Larkin comments "These pictures address a number of Gollings’ primary concerns as a photographer ... they demonstrate the regenerative power of nature, evident in the traces of life beginning to emerge in the face of a bushfire’s terrible blackness. They also reiterate Gollings’ long-standing interest in documenting the power of nature, again registered in the indications of regeneration and the fact that such tremendous beauty can be found in places of chaos and destruction." 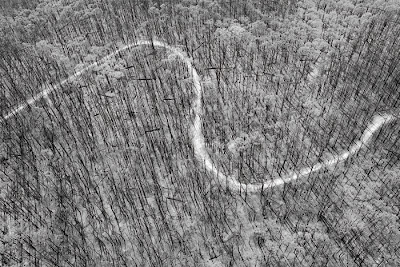 Gollings' pictures, taken from the air only a week after the Black Saturday bushfires, reveal the burnt landscape in its most graphic, injured mood. (pictured, top) Through Gollings' eyes, scorched earth resembles a giant's stubbled cheek, bisected by a road that simultaneously resembles a curved scar - or the classic serpent from Aboriginal mythology.(pictured, above) There are also other surprises hidden within the photographer's tightly textured observations: trees whose crossed, broken branches resemble crucifixes. In Gollings' colour images there is the irresistable feeling that the photographer playfully references Australian painting's most astringent poet - Fred Williams. 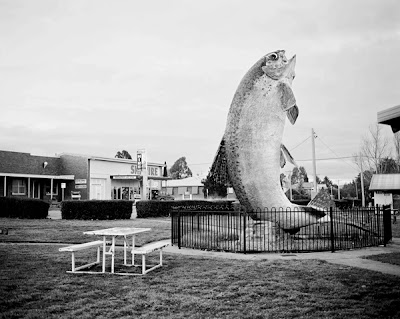 Edmund Pearce are also showing "Australian Gothic" a series of wry observations  by Jane Brown who celebrates  Australia's obsession with elevating creatures from nature to larger than life, iconic status. (pictured, above) 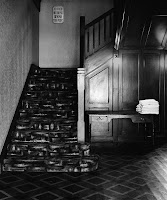 Brown's distinct gift for photographing sensed human presences in unpeopled landscapes and interiors can clearly be seen in this sombre image. (pictured, right) Further evidence of this unique vision can be found on her website www.janebrownphotography.com When interviewed in the Weekend Australian Review on August 6-7, 2011, Brown commented "I find it interesting how monochrome is used to differentiate the living and the dead, the past and the present. It has an ability to transcend the constraints of time, memory and death. I examine this a lot in my work – landscapes seem to have vestiges or traces of past life and memorials become otherworldly.” Until May 12
A TEAR IN THE FABRIC OF AUSTRALIAN PHOTOGRAPHY
Richard Millott 1946-2012 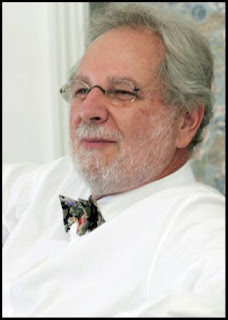 Reading Rob Imhoff's detailed tribute to Richard Millott (pictured, right)) it was obvious that Australian photographers, and perhaps especially those in Melbourne, are part of a community - an extended family that mentors, nurtures and indeed constructively criticises. I did not know Richard Millott, but it is clear the positive influence he had and the many lives he affected. Ed.

Posted by ozphotoreview at 1:23 AM 5 comments: