The Wonders of a Visual Spring 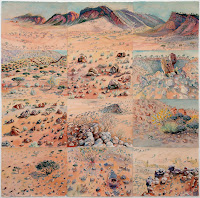 ision is difficult to categorize. He has produced memorable still life photographs - from a table (below left) reminiscent of Magritte, observed in the Y 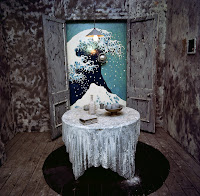 ellow House in 1971 - to his voluminous portrait archive of Australian artists. Weight also has a playful side - once producing colour still life images of that archetypal child’s doll Barbie, revealing an unexpectedly trashy side to her character. What has never been in doubt is Weight’s instinct for making memorable images. When I first saw his planetary nightscapes from Emily Creek in central Australia, made while on an art odyssey with his partner, the painter Carol Ruff, I had similar feelings to when I first saw Tamara Dean’s The Bride. “Emily Creek” is part of their joint exhibition “Love Creek Bitter Springs” at Sydney’s Australian Galleries www.australiangalleries.com.au and has as deep a resonance as Dean’s vision. This image will prove equally unforgettable. In a rare, but not unique conjunction of talent Weight and his painter partner Carol Ruff have a rewarding artistic harmony - Weight’s meticulous nightscapes with Ruff’s sun-drenched view (above right) of Australian desert. Australian Galleries until October 31. 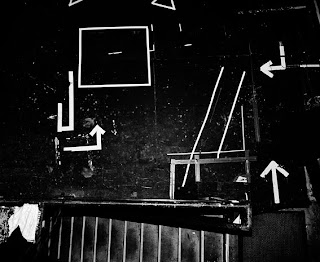 Magnum photographerTrent Parke’s period as artist-in-residence at Sydney’s Opera House resulted in two distinct bodies of work. “Please step quietly...” concentrates on the backstage environment of the epic building and will be seen at Stills Gallery. www.stillsgallery.com.au Park finds uncommon beauty in observing the everyday - performers marks on the surface of the stage form a graphic geometry (left) and that most mundane of stage accessories, a wire coathanger, creates a chaotic elegance backstage. 28 October to 28 November 2009
Parke’s images of the people working at the Opera House will be seen in the building’s forecourt, from October 22 to February 2010

Sydney Life - The Pulse of Sydney
Each year the City of Sydney takes a visual census of life in this thriving city with the exhibition “Sydney Life”. Increasingly the view selected by the judges is less stereotypical and more reflective of the cultural diversity of Australia’s Harbour City. This year is no exception and the winner in 2009 in Tamara Dean’s enigmatic and unforgettable “The Bride”(below right). Sydney Life also presents its photographs in a 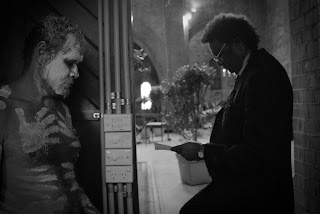 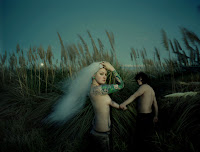 , appropriate way. Each picture is printed on bedsheet-sized canvas sheets and displayed on both sides of the walkway bisecting Hyde Park. At this scale, images carry the aura of static cinema, as a British commentator on photography once proclaimed. Despite the expansive scale of Sydney Life, there is still room for intimate social observation as well as more blatant behavioural observations. Amanda James’ black and white photograph (left) of an indigenous dancer waiting in the wings is another image not easily forgotten. Until October 21

- His Own Personal Century
Brett Hilder has as long an artistic pedigree as Greg Weight but his path, and vision, differs greatly. Where Weight is precise and observational, Hilder is always one step (or more) closer to visual fiction. His recreation, visually, of the spirit of the remarkable Tina Modotti is no convenient visual ploy. At times, Hilder’s re-staging of imagined moments from Modotti’s ultimately tragic 20th Century life seems to almost channel the essence of the woman who beguiled Edward Weston and intimidated a politically defensive America. These pictures such as "Ethnic Back" (at left) remain elegant fictions, however, perhaps the photographic equivalents of what novelist, the late Norman Mailer, flamboyantly coined ‘factoids’. Closing October 24 Prints may be viewed at the Meyer Gallery www.meyergallery.com.au 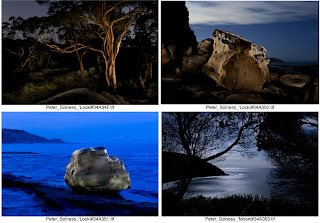 lness - NOCTURNAL
Peter Solness is about to re-introduce his peerless images of the night, this time through light box illuminations of each landscape, rather than the large, fine digital prints previously exhibited at STORM Gallery. In one way this seems technically appropriate, having light pass through transparencies on view (instead of reflective prints) at Customs House, adding further luminousity to a unique vision. Until the end of January. 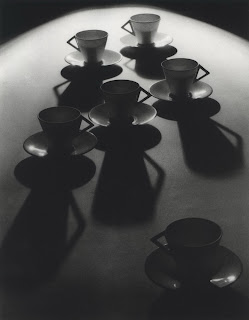 Lebovic Gallery
Olive Cotton (1911-2003)had a gentle, questing vision that found harmony in subjects as simple as flowers and clouds. Cotton’s real strength, however, lay in the quiet discipline she imposed on each picture, composing subjects as disparate as landscapes, male and female nudes and still life arrangements. While frequently romantic in essence, Cotton was also a thoroughly modern photographer as the prints on exhibition at Josef Lebovic Gallery www.joseflebovicgallery.com prove. A previously unseen female nude, taken in 1937, is on display. The presence of her most famous image “Teacup Ballet” reminds us of its geometric perfection. Cotton had apparently bought a set of six Art Deco cups and saucers for use by her studio guests and for fun, one suspects, photographed a playful arrangement of six cups, with its distinctive, triangular handle, lit from above and behind. The effect was clearly balletic and the picture has enjoyed great popularity during and after Cotton’s life. While I had always realized its geometric virtues it was only when I interviewed this quiet, modest woman on her Koorawatha farm, near Cowra, that she mentioned casually that she had once taught mathematics, and especially trigonometry, to naval aviators during the war. Suddenly this elegant and humble picture, made only a few years earlier, made even more sense. Until October 31 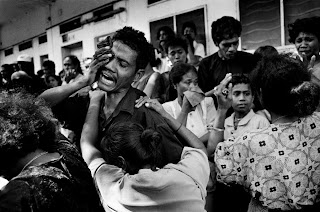 ian Centre for Photography
°SOUTH are a distinguished group of Australian documentary photographers who have covered conflicts from Vietnam in 1965 to Afghanistan. Ben Bohane, Michael Coyne, David Dare Parker (at left - Mourning), Stephen Dupont, Sean Flynn, Ashley Gilbertson, Tim Page, Jack Picone. As these members say, "at present there are 43 conflicts taking place on our planet. Once, the battlefield was the place of devastation, now it is streets, alley-ways, schools and places of worship. People and places are no longer protected or sacred and in much of the world it is now safer to be a soldier than an unarmed civilian."
As dangerous as it is, war is a human activity that must be documented and this group of photographers (including the sadly absent, presumed long deceased Sean Flynn) have addressed this challenge. The results of their journey through into darkness are currently on view at the Australian Centre of Photography www.acp.org.au . It is noticeable in this group that the totality of war’s effect is evident.As members state, “this collection of their images exposes the impact that war has on its victims, both civilians and military, whose lives are shattered by wars they did not start and over which they have no control.” The Nikon-Walkley Press Photo Exhibition is also on display at the adjoining gallery within the ACP - until November 21 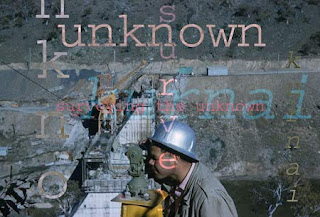 Brenda Croft’s art never strays far from family and her indigenous roots. With words elegantly superimposed over archival colour photographs of her late father working on the Snowy River scheme, Croft divines the ironies of her father’s proud participation in Australias’s epic engineering project - while not failing to note the Aboriginal lands the workers carelessly transgressed. Croft’s artworks continue their meticulous construction of a mosaic of Australia’s black and white past. At Adelaide’s Greenaway Gallery www.greenaway.com.au until November 15
BOOKS - “Sly 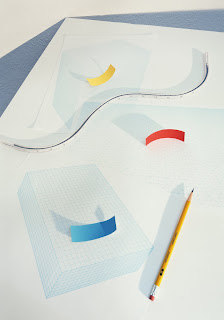 Conspiracies” by Graham Howe
Graham Howe is a most visually literate photographer. Once the inaugural Director, in 1973, of the Australian Centre for Photography, Howe now commutes between Australia and the United States for Curatorial Assistance www.curatorial.org a company he founded to mount and tour r 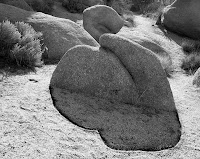 emarkable art exhibitions, especially photography. In between Howe has curated the photography collection of Graham Nash (of CSN&Y) and also written biographies of two very different photographers - the indefatigable 1930's documentarian E.O. Hoppe and America’s flagrantly inventive, erotic colourist, Paul Outerbridge. Now Howe has published a book of his own b&w and colour photographs made over the past forty years “Sly Conspiracies” (ISBN 978-0-9823046-2-4 UCR/California Museum of Photography) that might well be dedicated to novelist Vladimir Nabokov’s maxim - “Nothing is trivial ... the divinity is in the detail”. Howe’s camera consistently follows the trailing edges of human experience ... imprints of car tires slowly disappearing into desert sand, or a seemingly pliable rock (of the same mass and shape as one of Edward Weston’s rare nude African-American models) photographed by Howe in 1978 next to a Joshua tree, with the rock’s mass confirmed by its voluptuous shadow (p77 and above - right). Howe is clearly seduced by playful illusions which he uses to regularly punctuate his book - whether monochrome patterns formed by detritus lying on the arid floor of California’s Death Valley (p60) or a pencil, tape measure and three curved pieces of tape making a delicately coloured, abstract face on a drawing table. (p121 and above left). Somewhere the artist Paul Klee must be spinning happily in his grave at these elegant conceits.
IMAGE/TECH
I have recently taken delivery of yet another of the new 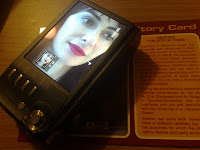 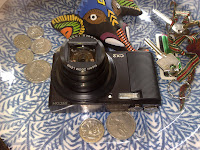 neration of amazingly compact point and shoot cameras. So feature rich is the Ricoh CX-2 that I shall only tell you what I have discovered so far. The 10X Ricoh lens is sharp and both wide and tele - close to 28mm to 300mm in old money. Performance at 1600 ISO is more than acceptable and there are some neat navigational features. There is a little joystick on the back of this very (almost too) compact camera which does double or perhaps triple duty - taking you through the picture you are playing back as well as navigating through the menu. Good design by Ricoh. I have not successfully tested the D-R or dynamic range extender - though it seems a marvellously useful idea to be able to retain detail similar to that seen by eye. To build a camera the size of a pack of playing cards with so many features seems almost de rigeur these days. But, with care, these tiny marvels - and every camera manufacturer has them - can make seriously good pictures - whether for our families, or for the moments when you just don't feel like carrying a DSLR. I was surprised however, that Ricoh did not go the extra yard and include a HD video capacity. I will post a fuller review on my next blog.
Text copyright Robert McFarlane 2009
Posted by ozphotoreview at 11:19 PM No comments: