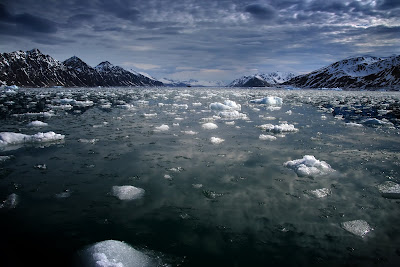 When I was last in Sydney, I saw two exhibitions in which artists offered planetary perspectives on wildly differing environments - Emma Rowan-Kelly's "innocentarctic' conveyed subtle, almost monochromatic colour visions of the frozen North - while Richard Green's latest showing of his "Remote and Wild" landscapes revealed distant regions of Australia (an exhibition I was privileged to open at the Hawkesbury Regional Gallery in Windsor)

Rowan-Kelly's seductive Arctic land and seascapes (pictured, above) can be seen at Danks Street Depot ll Gallery http://www.2danksstreet.com.au/ and offer deceptively simple views of what initially seems the bleakest habitat imaginable - including this photographer'

s take on the Arctic's often playful, sometimes menacing inhabitants. Polar bears emerge as the main stars in her pictures as they frolic in water so cold humans would perish in minutes. Rowan-Kelly has captured the bears' massive, yet graceful forms along with their families (pictured, left) with one memorable picture showing two adult bears in active dialogue above the exposed spine of a dead whale. (pictured, right) Rowan-Kelly also makes extensive use of panoramas to address the vastness of her northern world. Ultimately hers is an affectionate view of an environment that defies its apparent hostility. Rowan-Kelly's fine prints were made by master digital printer Warren Macris. http://www.gicleeaustralia.com/ Until March 5 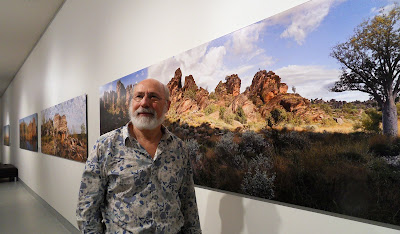 Richard Green (pictured) declared, as I waited to open his well attended exhibition at the Hawkesbury Regional Gallery http://www.hawkesbury.nsw.gov.au/services/cultural that he hoped his pictures gave a sense of "actually standing within the landscape" he sought to portray. As I walked around this elegantly curated display of large, seamlessly computer-stitched colour panoramas, some over four metres wide (taken with professional Canon cameras with 'L' lenses http://www.canon.com.au/ ) , there was a tangible sense of having your vision embraced by whatever scene Green chose to photograph. This was particularly evident in a subtly observed landscape from Western Australia, in front of which I had photographed Green. (pictured, above) Not only was the land's contorted surface exposed but the extended tonal range captured in Green's digital image gave appropriate weight to both the deep shadows and bright highlights of inland Australia. Both Rowan-Kelly and Green had made images that conformed to the description of a 'planetary landscape' -

giving the viewer of their photographs a sense of actually standing in a remote, defining location somewhere on the surface of our sphere - without resorting to visible cleverness or artifice. It was also pleasing to note how well patronised (pictured, the gallery before the opening speeches) Hawkesbury Regional Gallery was, as seen in this stitched panorama taken by Richard Green. After similar positive experiences with Broken Hill, Cowra and Manly, I remain convinced of the invaluable roles such galleries play. Until March 20
A Fine Farewell to a Remarkable Life 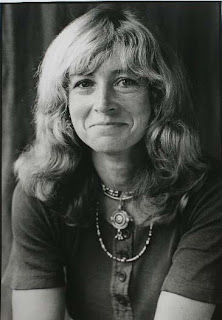 After opening Richard Green's exhibition I had just enough time to travel from the Hawkesbury Regional Galler in Windsor, expertly driven by a friend, and fine publicist for Sydney's MCA, Gaby Wilson, to the Balmain Town Hall for the final hour of a moving wake for British/Australian photojournalist Penny Tweedie http://pennytweedie.com/ who sadly died in January. The auditorium was full and there were many moving tributes from friends and colleagues. (Tweedie had also owned a terrace house in Balmain during her Australian life.) I had the opportunity to catch up with Penny's only son Ben, after many years. Ben Tweedie http://www.cycleexperience.com/ is now dedicated professionally to extolling the many and varied virtues of cycling. The Sydney Morning Herald had run an obituary I had written for Penny on the Saturday preceding the wake, using a fine portrait of the late photojournalist (pictured, above) taken by Sandy Edwards http://www.smh.com.au/national/obituaries/images-framed-by-compassion-20110218-1azl3.html
The Savage Poetry of Flight 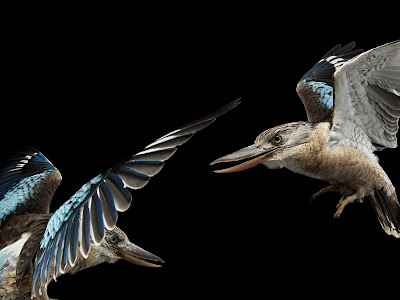 I was also asked if I would speak at Gary Heery's exhibition of remarkable bird photographs at Sydney's Shapiro Gallery. http://www.shapiroauctioneers.com.au/ Heery is a photographer who consistently confounds expectations. Perhaps best known for his celebrity portraiture (Heery has photographed everyone from Madonna to Seinfeld's classic Fool - Michael Richards and, more recently, John Howard) Heery makes his living through the profitable triumvirate of editorial, advertising and corporate photography but, as h 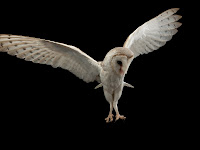 e confided at the opening, is seduced by what the eye can't see - such as the astonishing speed at which birds beat their wings. And so Heery www.garyheery.com photographed the avian community using Sony DSLR's, Carl Zeiss lenses http://www.sony.com.au/article/334804/section/product/product/sal2470z and ultra high speed (1/30,000th of a second) flash. His feathered subjects ranged from those remarkable birds that defer to no one, Australia's Kookaburras, (pictured, above) an exquisite white Barn Owl (pictured, left), an acrobatic pas de deux by two snow white Doves and an unusual triptych of birds with their furled wings seen from behind. These three similarly hunched forms - of a Macaw, a Blue-winged Kookaburra and a Red-tailed Black Cockatoo - eerily resembled a trio of waiting, psychedelic angels. Heery's photographs were also  presented in large, superb archival prints made by Warren Macris. Until March 6.
The Birth of Beatlemania in the U.S. 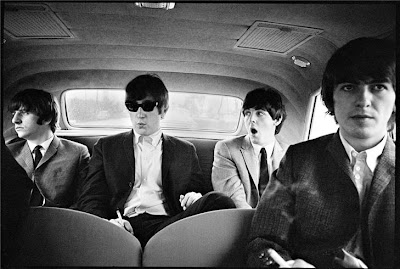 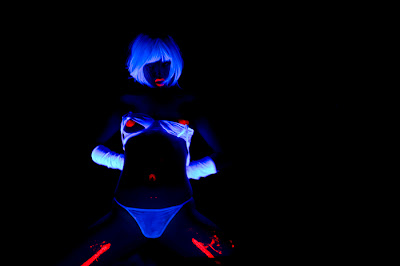 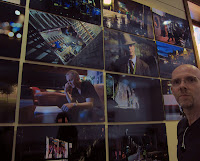 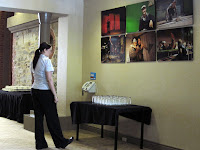 Adelaide photographer Gary Cockburn has an unusual visual signature; whether by instinct or intent, Cockburn's photographs consistently capture moments that seem less "decisive" and more extended than other photographers. Coupling this personalised visual grammar with his Nikon D700, this talented artist has been documenting Fringe Festivals from both Adelaide and Edinburgh in the UK for several years. Cockburn regards using the Nikon D700 DSLR as essential to the success of his project. "I couldn't have done it without the extraordinary low light performance this camera provided," declared the Adelaide photographer  These resulting colour images (pictured, left and right) were on exhibition recently as part of Adelaide Fringe 2011, appropriately titled "Into The Fringe", in several separately displayed assemblages in the foyer of Adelaide's handsome and historic Town Hall in King William Street, Adelaide. I caught up with Cockburn for a coffee as he was dismantling his Type C metallic colour prints and noted the simple, evocative coverage he consistently achieved. During the recent Adelaide Fringe Festival Cockburn also documented, with his usual flair, one of the Fringe's trademark drawcards - Australia's remarkable burlesque performers - in "Strip The Light Fantastic" - featuring the elegant Gypsy Wood (pictured, right) and the luminous, fluorescent-lit stage presence created by Holly J'aDoll (pictured, above) And not content with having travelled extensively between Adelaide and Edinburgh to document the last three Fringe Festivals already, Cockburn is about to do it all again and capture the working lives of the remarkable artists who will make Adelaide and Edinburgh's next Fringe Festivals memorable. I suggested to Cockburn that this body of work, drawn from Scotland and Australia, should be preserved within the covers of an appropriately well designed and reproduced book. He agreed and the search for an appropriate publisher has now begun.
The Shock of the Old. 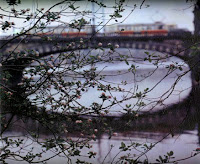 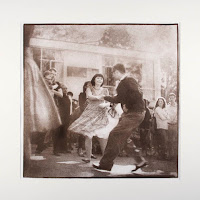 Darlinghurst's Meyer Gallery in Sydney www.meyergallery.com.au continues to explore the inherent beauty of printing techniques dating from photography's first, confident wave of discovery. Featuring fourteen artists (including Anthony Browell, Chia N-Lofqvist (pictured, left her Tri-Color Carbon print) Jill Lacina, Tony Peri (his Bromoil of a rock n' roll revival is pictured, right) Bob Kersey and Ellie Young, this exhibition celebrates, says gallery director Mary Meyer, "the broad spectrum of alternate photographic processes (and) the pictures they have made - by hand. And from the heart." Curated by Bob Kersey. Until March 13 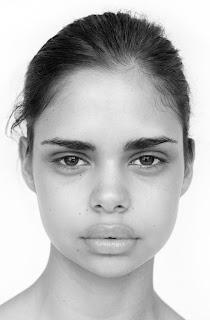 I have just received this interesting, guileless portrait of Aboriginal model Samantha Harris from photographer Hamish Ta-Me www.shotbyhamish.com with the news that this talented photographer was 'stoked' that his image of Samantha had been selected for hanging in the prestigious exhibition in Canberra. Ta-Me's image reminds us that, with the recent success of Harris making the cover of VOGUE, indigenous stereotypes are crumbling.
"Received Moments" Reaches the Gold Coast

ted by Sarah Johnson of the Manly Art Gallery & Museum, is now reaching the end of its run at the fourth last venue in its Australian tour, the Gold Coast Art Centre http://www.theartscentregc.com.au/ part of the regional galleries network. I travelled to the Gold Coast for the opening and gave two gallery talks. I was, as always, delighted with the different, and original 'hang' of the show provided by each venue. Director Virginia Rigney and her staff created an unusually intimate display. Photographer and Arts Producer Michael Snelling opened the exhibition with considerable generousity of spirit on March 4th, regaling the audience with many events in my earlier life that I thought had been long forgotten. (The next venue is at Maitland Regional Gallery, opening on April 1st, followed by Orange Regional Gallery before ultimately arriving at the Flinders Art Centre in Adelaide in October 2011. From "Received Moments" (pictured left) acclaimed Australian actor Leo McKern (1920-2002) Braidwood, NSW 1994 and (pictured, right) Wilson's Promontory, Victoria 1969
Text: Copyright Robert McFarlane 2011 www.robertmcfarlanephotos.com
Posted by ozphotoreview at 9:03 PM 1 comment: