Bob Dylan, Rennie Ellis and other forces of Nature.

Bob Dylan in photographs: 1964 to 1971 - at Blender
Great artists seem to attract great photographers, as if needing witnesses for their talent. Think of Stravinsky and Irving Penn, Jackson Pollock and Hans Namuth, together with rarified collaborations such as Thelonius Monk and W. Eugene Smith - or Picasso and David Douglas Duncan. Bob Dylan was no exception, and during his crucial, fertile early career, Dylan - either by foresight or his record company's professionalism - was documented by some talented U.S. photographers. Blender Gallery www.blender.com.au director Tali Udovich has carefully curated "Bringing It All Back Home", handpicking fine-art photographic prints from Morrison Hotel Gallery in the U.S. and Rockarchive http://www.rockarc 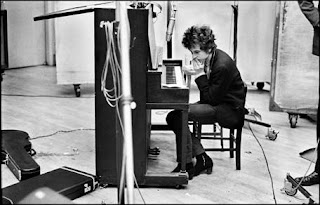 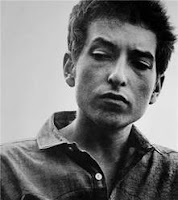 ain, creating an exhibition which defines Dylan's early years. Barry Feinstein's 1966 observation (pictured above) of an inscrutable Dylan marooned in a London limo, ignoring young fans' faces pressed against the car window, proved a distinctly eerie pleasure, so close was this moment to Cate Blanchett's recent clone-accurate performance as Dylan in the 2007 Todd Haynes film "I'm Not There." Feinstein's melancholy portrait of Dylan (pictured, left) taken in New York three years earlier for the "The Times They are a-Changin" record cover, survives as a fine portrait in its own right. I also enjoyed Don Hunstein's 1965 image (pictured, above right) of a bemused Dylan, sitting at a piano in the Columbia recording studio in which his iconic album Highway 61 Revisited was being created. We now know Dylan's music well but these evocative limited-edition photographic prints give priceless insights into the life of a young man making popular music history, almost half a century ago. Until August 3
LATE NEWS: David Flanagan wins 1st Prize in Paris 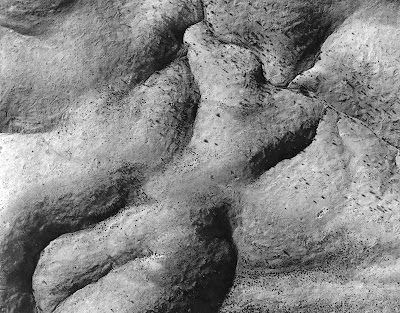 Mary Meyer of Sydney's Meyer Gallery www.meyergallery.com.au has just announced that one of her exhibiting artists, David Flanagan, has won first prize in the Professional Nature Earth category in the 2010 PX3 Prix de la Photographie, Paris. Flanagan's winning photograph (pictured) will be exhibited in Paris and published in the Px3 Prix de la Photographie annual. Meyer Gallery are currently showing two of David's winning entries on the mezzanine at their Darlinghurst Gallery. Several years ago when I first reviewed Flanagan's aerial landscapes at Marrickville's community gallery for the Sydney Morning Herald, it was clear this talented young Australian photographer http://davidflanagan.com.au/ had already mastered the abstract (and sometimes anthropomorphic) forms that emerge when landscape is seen from altitude. And like established masters such as American William Garnett (1916-2006) http://www.getty.edu/art/gettyguide/artMakerDetails?maker=1580 and Australian Richard Woldendorp http://www.richardwoldendorp.com/ Flanagan's vision never stops at just depicting the literal. David Flanagan's winning work can be viewed at http://www.px3.fr/winners/cat_details.php?cat_name=Nature&compName=PX3%202010&pro=pro
LATER NEWS: Sotheby's N.Y. sale nets US$12.4 Million 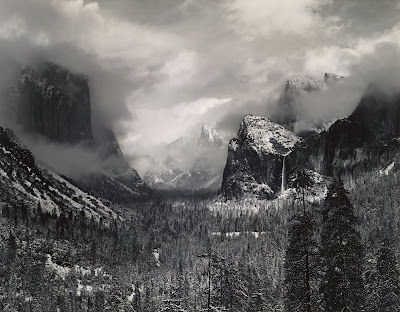 Photographs from the Polaroid Collection auction that recently concluded at Sotheby's New York, realised US$12,467,638, exceeding the auction house's pre-sale estimate by almost US$2 million. "Fourteen new artist records were set," reported Anne Wall of Sotheby's Australia, "including ones for a single photograph by artists Ansel Adams, Harry Callahan, Lucas Samaras and Andy Warhol", adding, "Polaroid founder Edwin Land's great friend and collaborator Ansel Adams's iconic mural-sized prints achieved many of the top prices of the sale, led by "Clearing Winter Storm, Yosemite National Park" (pictured) which brought US$722,500, well above its high estimate of US$300/500,000." Perhaps a single print of this Ansel Adams epic landscape, worth close to three quarter of a million dollars, can lead the ailing U.S. economy towards a fine-art photography-led recovery!
Melbourne's Visible Sense of Itself.
At the invitation of Manuela Furci and 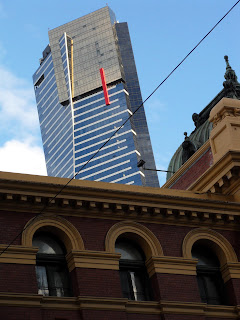 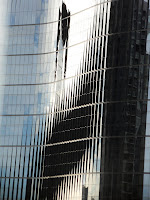 Photographic Archive http://www.rennieellis.com.au/, I recently visited Melbourne to take part in a discussion at the Victorian State Library concerning the life and work of Rennie Ellis. Sadly Ellis died in August 2003, not long after I last saw him at Old Parliament House in Canberra, at a reunion exhibition (at the National Portrait Gallery http://www.portrait.gov.au/index.php) of photographers who had once worked for POL magazine, and its mercurial publisher, Gareth Powell. We must have looked a disreputable, rumpled lot, as we shuffled uncomfortably in the cold Canberra air, outside the low, snow white building that had seen so much Australian history - including, of course, Prime Minister Whitlam's shabby dismissal on November 11, 1975. All except Rennie, who arrived wearing a pale, elegantly tailored linen suit, an improbable Melbourne suntan (he surfed frequently at the beaches of that city - surely a courageous act) An abundant mane of hair flowed to his shoulders and he seemed to have weathered the decades since POL's heyday far better than everyone - certainly than I. Sadly this was an illusion as Ellis would die of a cerebral haemorrhage later that year. As French sculptor Frederic Chepeaux once said to me, in a booming Breton accent, about the cancer that was killing him, "Robert, I have a traitor in my castle!" So, it seemed, did Rennie. Last week I found myself back in Melbourne to again pay homage to Rennie's extraordinary life - documenting Melbourne life at every level, from precise tableaux of street life (pictured, right) to the majestic women of Melbourne fashion. To say that Ellis loved women, and delighted in photographing them, is to risk serious understatement. As Mao Zedong (1893-1976) once remarked of his country's historically oppressed women, "women hold up half the sky." The women Ellis photographed echo this sentiment and though sometimes observed nude, or at least exposed, you still sensed the strength and primacy they held in his world - as in these photographs of the heroic figure of Women's Weekly magazine editor-in-chief Deborah Thomas at the races in 1977

(pictured, right) and the unblinking, spontaneous observation of a finely formed young woman (pictured, left) stooping to conquer the (unseen) occupant of an equally elegant Ferrari. Now this body of work is to be acquired, preserved, digitized and made accessible from within the venerable walls of the Victorian State Library. The Library have also established a website at www.slv.vic.gov.au/goto/rennie-ellis to raise $200,000 to offset the cost of purchasing the archive. Ellis and 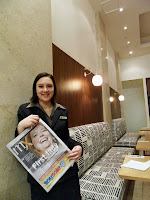 will continue to respond personally to requests for the fine-art market for Rennie Ellis photographs but I sense a definitive monograph on this fearless, charismatic Australian will soon follow this important acquisition by the Library. And as I travelled from the airport into the city of Melbourne, I was again struck by that city's clear sense of itself - from its playful mix of modern and traditional architecture (pictured, above) to the confident women working in the boutique Flinders Street Citigate Hotel in which I was lodged. As Kevin Rudd faded from the Labour leadership and Julia Gillard calmly assumed her role as Prime Minister, Hannah, Citigate's restaurant manager (pictured) signalled her approval with a resonant pose and a noticeable spring to her step.
CANDID CAMERA enters last month at Art Gallery of SA 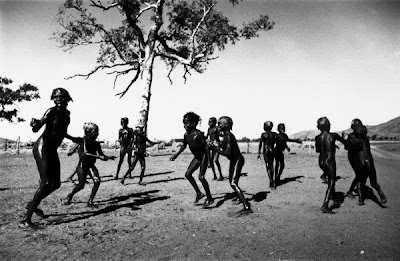 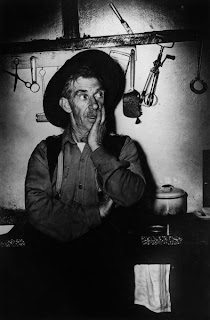 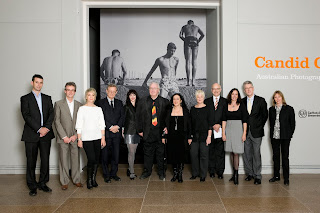 "Candid Camera" was opened by writer and commentator David Marr (pictured, with Curator Julie Robinson on right of picture, with photographers and AGSA guests standing in front of Max Dupain's At Newport 1952) http://www.maxdupain.com.au/about.htm) In a vastly entertaining speech, Marr showed his great knowledge and respect for the value of documentary photography - while also exercising a finely honed, often wicked wit. Until August 1
Do Not Despair For The Future of Print.

http://www.johnbaxterparis.com informing me that he wished to use a picture I had taken in the 196o's of famed Film Director Josef Von Sternberg and David Stratton (pictured, right) then director of the Sydney Film Festival. Naturally I was delighted, and John went on to mention an interesting blog, Slate, which eloquently discusses the future of the printed book, currently under siege from the advent of the iPad and Kindle. Despite its peerless speed in distributing data, if not wisdom, the internet does not yet have an answer to the convenience, and energy efficiency of simply reading a book. And art books, with their modern, near facsimile standards of reproduction, provide a tactile experience currently beyond so called e-ink and even the finest LED/LCD screens. SLATE can be found at http://www.slate.com/id/2258054/