Raising the Bar in Taking and Showing Pictures 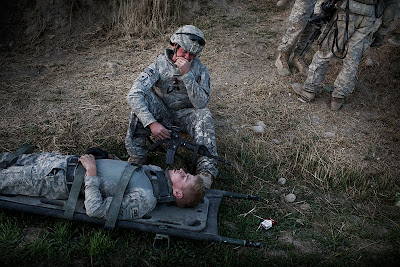 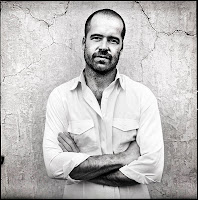 www.adamfergusonphoto.com (pictured) has been selected for inclusion in the next World Press Photo Masterclass in Holland, the first from this region since Jesse Marlow www.jessemarlow.com/ four years ago. Ferguson's powerful emotional narratives (pictured, above) mark him as a photographer of already considerable courage and talent.
'Block K' and the Simpler Things of Life at Point Light. 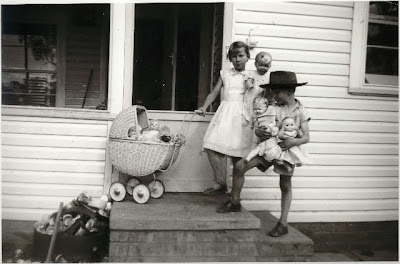 Block K was a

1,500 acre soldier-settler block of land in North-Western NSW won in a post-war ballot by Pat Sweet's father, after returning from the Second World War. Sweet was given a Brownie 127 camera at age twelve and her simple, honestly observed photographs (pictured) at Point Light Gallery www.pointlight.com.au mark a departure from the usual, immaculately sharp prints made from large format negatives often seen in that shrine to classic, silver-based photography. "Fifty Years on Block K" provides a remarkable insight into growing up on a farm when there were no roads, mains electricity or, initially, a phone. I once saw an interview with a survivor from one of these often uneconomic, difficult to farm blocks of land and the old woman was asked what they did for entertainment on the farm at night. "Well," she replied, "we had the fire to look at." Until June 20
Beer, Cricket and Art - Peter Solness Gets It Right. 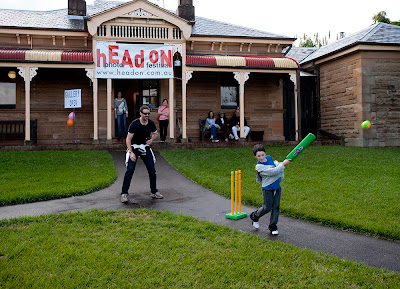 In a tribute to the Head On Photo Festival, photographer Peter Solness has come up with an idea ahead of its time ...
"Dear Photography, and/or beer and/or cricket lovers,
I've spent the last few weekends at the Superintendent's Residence at Centennial Park (pictured, above) supervising my exhibition, The Night Garden, which is drawing good crowds. The most frequent comment has been about the 'sheer beauty' of the images, which has been most gratifying. However in my quiet times between visitors, it has been the 'sheer beauty' of a sun-soaked lawn at my front door that has driven me to distraction. I'm not good at staying indoors all day, so I have instigated a new unofficial concept to the Sydney gallery scene, 'Beer, Art and Cricket Afternoons'. Each Saturday and Sunday afternoon between 12 and 3pm (until the exhibition closes on June 6th) there will be tub of cold beers on the verandah (lemonade for the kiddies) and a cricket set arranged on the quaintly framed lawn at the front of the gallery. It has a white picket fence around it and incorporates splendid views to the south over the park. Drop by for a quintessential Sydney afternoon if you have the time. There is also a great show by the ACMP photographers just short stroll down the hill. So it's all happening. My thanks again to the Head On Photo Festival team and Centennial Park management."
New Peter Solness Workshop
Solness is also remarkable as a photographer for not only taking pictures but also giving freely in workshops for other photographers. "The good news is I'm doing another workshop (see attached promo) on Saturday 29th May at 4.30pm for two hours. Called Lunar Adventure ... it will coincide with a full moon phase. Places are filling up fast though." For information and bookings go to http://discoveryphoto.org/dpj/ or else http://headon.com.au/content/workshops or Centennial Park'swebsite http://www.centennialparklands.com.au/activities/whatson/head_on
The Myth of Illumaroo has begun!
"If you have ever wanted to get inside the head of an 'Illumaroo', this 7 minute gritty video is an absolute must." says Solness cryptically, referring to his hilarious nocturnal performance as luminous Australian fauna. "Not many people have ever, will ever, or possibly will ever want to understand the primal instincts of an Illumaroo ... if you're looking for a bit of raw bush mythology in the making, just click your mouse on this link and take the journey." http://www.youtube.com/user/mrsolness (Solness thanks Murray van der Veer, René Volgelzang and the Discovery Photographer Team for their invaluable help on this video)
Peter Solness will also be giving an artist talk this Sunday at Centennial Park with Chris Gleisner, Torunn Momtazi and other photographers as they discuss their work. No bookings necessary.Venue: Centennial Parklands Restaurant, CP Dining, off Banksia Way.
LATE NEWS:: "Through Our Eyes – The Afghan Child." Tuesday May 18, 7.30pm 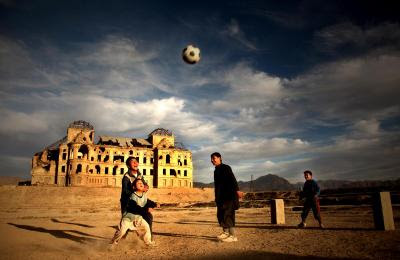 Moshe Rosenzveig has just reminded me the last and one of the most important events of the Head On Photo Festival is to take place tonight, Tuesday, May 18th at Airport North Gallery "Twenty-six haunting images (on show) from twelve Afghani photographers, will provide a rare insight into the world of the Afghan child," says Head On's founder. More importantly there will be a silent auction of these works by Mahboba Rawi, founder of Australian-based aid organisation Mahboba's Promise. "Australian audiences can expect to be taken on a journey to a country where roughly half the population is under 18 years of age, with many of these children having been born into war-time." adds Rosenzveig. Photographs on exhibition were taken by Afghanistan's only independent photomedia institute, the AINA Photo Agency. All proceeds from the auction of the photographs will go to the AINA Photo Agency to continue the training of Afghani photographers and photojournalists. A remarkable event not to be missed. (pictured, above, photo: Jawad Jalali)
Airport North Gallery, Level 1, 597 Gardener's Road, Alexandria, NSW, 2015
Australia. Phone: 02 8338 8833
EVEN LATER NEWS: 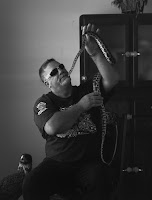 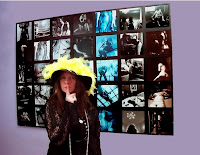 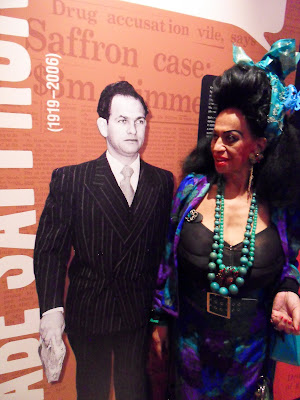 Sydney's extraordinarily 'iffy' past was on show in May in a dense, finely curated show at the Police & Justice Museum. I confess to having a personal interest in this display, having been approached by its curator, Tim Girling-Butcher, for pictures some months ago. The curator knew I had photographed in King's Cross in the early sixties and also included an extensive selection of archival pictures by my now sadly departed, talented colleague, Rennie Ellis (1940-2003) http://www.rennieellis.com.au/ who also photographed extensively there. Girling-Butcher was recreating the aura of notoriety Sydney and "The Cross" then possessed. Nothing prepared me for the atmosphere that greeted visitors to the historic www.hht.net.au building near Circular Quay. Girling-Butcher had captured perfectly the lurid atmosphere (red velvet was abundantly present) of the backrooms of the stripclubs in which I had photographed over forty years ago. Present were a series of near life-size portraits of some of the era's leading players, such as Abe Saffron (pictured, above left, with famed transgender performer Carmen) giving the visitor, as you moved around, the uneasy feeling of being watched. This was not helped by a veteran crime writer, who recognizing me, exclaimed, "I now know who killed ... " and then named one of Sydney's leading gangsters of the period (whom I had met) who came to an unfortunate end, gunned down in an eastern suburbs lane. Not wishing to be privy to such potentially dangerous information, I said "I would rather not know ..." and tried to move away. "Don't worry," he persisted, "it was a death-bed confession!" After half listening to the convoluted, tragicomic tale of the gangster's demise, I was eventually rescued by needing to photograph transgender entertainer Carmen, (pictured) one of the Cross's more formidable survivors. Until May 22, 2011
Don't give in to 'compassion fatigue' - visit HAITI as seen by Christina Simons 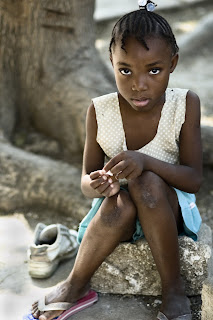 The great U.S. documentary photographer Lewis W. Hine (1874-1940) http://www.historyplace.com/unitedstates/childlabor/index.html was once asked what he wanted to achieve with his camera. "I want to photograph what should be appreciated - or changed!" This simple 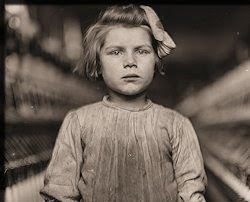 maxim led to Hine's poignant early 20th century photographs of child labourers (pictured, right) in the U.S. creating a current of outrage that caused, only a few years later, child labour laws to be introduced. Australian-based photographer Christina Simons would appear to follow Hine's ethic in her documentation of the effects of Haiti's recent earthquake tragedy. The Haiti Project www.christinasimons.com/thehaitiproject is Simons' attempt to make a difference to the afflicted citizens of that devastated country, especially the children. Her gentle,

positive observations (pictured, above left) are on exhibition for another week at master printmaker Cam Neville's Storm Gallery (2/65-67 Foveaux Street, Sydney) Proceeds from print sales will go to orphanages working with Haiti Earthquake Relief. (pictured at right, Christina Simons with Haiti street kids) Until May 22
HEAD ON Winners Announced
Head On reported there were 1,200 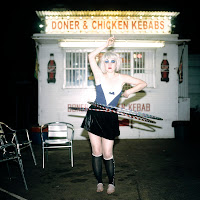 ent on the evening of April 30 when Federal Arts Minister Peter Garrett announced the Head On Portrait Prize. www.headon.com.au I can only say that the Australian Centre for Photography http://www.acp.org.au/ was packed for the Minister's announcement, during which he made a rousing speech endorsing the importance of art of all kinds for future generations. Fiona Wolf's "Jacqui" (pictured, above left) and Karl Schwerdtfeger's "Mike" (pictured, below left)were winners together with Gil Meydan's poignant "Noah" ( pictured, above right) chosen as this Critic's Choice selection. Head On was i 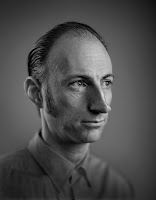 ts usual entertaining self with colour portraits predominating this year and humanity, not celebrity, writ large around the walls of the ACP. What I personally missed in this year's selections were more B&W observations of the simplicity and poignance of Meydan's "Noah". There seemed a desire among most entrants to be overtly visually entertaining, in both technique and selection of subject - rather than perhaps take a more difficult decision; to illuminate the usual - the ordinary - through pure observation. Until June 5 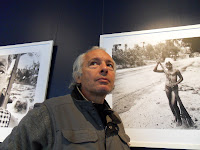 her new exhibition "Children of the Sea" at GalleryEAST www.carolruff.com 21 Burnie Street, Clovelly, opening on May 28. Where Lewis concentrates on portraying the faces of Kiribati's citizens, notably its children, Daley reveals a looser, more observational style. (pictured, right)
Simon Strong reappears, in coalition with Robert Doble
You may remember Simon Strong's amazing conceptual images from an earlier

blog (New Visions August 16, 2009). Now he has reappeared, in collaboration with Robert Doble www.dobleandstrong.com in "FIRST BORN" at Melbourne's BLOCKPROJECTS exhibition space www.blockprojects.com After the earlier elegance of Strong's work, as shown in 'Phantasia' at Adelaide's Samstag Art Museum, http://www.unisa.edu.au/samstagmuseum/ these new collaborative images gave me the kind of jolt Francis Bacon or perhaps even Goya, might have provoked when their works were first seen. Gone were meticulously realised Surrealist environments in which Strong's melancholy minidramas were successfully played out - replaced by Doble and Strong's closer, fractured, rearranged views of life. Until May 29
IMAGE/TECH: OUR SMALLEST DIGITAL CAMERAS LIFT THEIR GAME
At a time when the top of the line DSLR's are 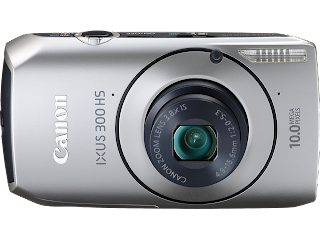 cing new cameras in inexpensive categories with intriguing, useful picture-making capabilities. Canon (Australia) www.canon.com.au have just announced their IXUS 300 HS (100 million IXUS cameras have been produced in the ten years since IXUS were introduced) which offers several desirable features for amateurs and even those professionals who want to slip a very capable, tiny digital camera into their shirt top pocket. Not only does the IXUS feature a 28mm wide angle setting on its 3.8X zoom, the lens also has a maximum opening of f2, at least a stop faster than most point and shoot lenses. The camera also offers 720p HD filming in video with an unusual, added feature - a 240 frames per second slow motion setting, allowing subject movement to be minutely analysed when played back at normal speed. You are also not condemned to owning either a chrome or black camera, with the IXUS available in three colours (pictured, left) This camera also features a newly designed 10 megapixel back-illuminated CMOS sensor which, Canon say, combines with DIGIC 4 image processing to improve low light performance and reduce noise at high ISO's. There is also evidence in this camera's curved body contours that Canon have not forgotten the lessons learned when famed German industrial designer Luigi Colani created their revolutionary Canon T90 film SLR in 1986, still regarded as a landmark in camera design.
Recommended Retail Price will be announced shortly.

Posted by ozphotoreview at 4:04 PM No comments: