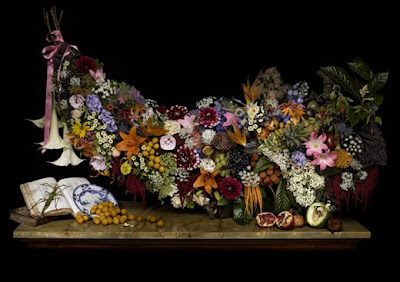 Three very different photographers, coincidentally all represented by Stills Gallery http://www.stillsgallery.com.au/ are showing in Sydney and exploring distinctly varied visual yearnings. Robyn Stacey brilliantly uses computer-constructed photographs to give us her view - by digital proxy - of what colonial Australians might have seen once they entered a room, sat down to eat, or simply contemplated a beautifully imagined still-life suggesting a scene from the 19th century (pictured, above) Stacey's images give sight to memory, substance to the half-remembered and always with the razor sharp definition of digital imaging. These yearning instants are passionate attempts to plumb echoes from dead 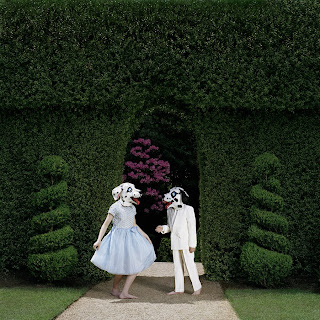 eras - in the same way we might respond, for example, to the scent left by the 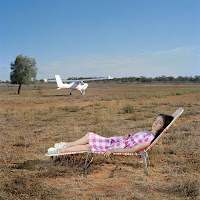 emotional scenes in artist Caravaggio's paintings. Polixeni Papapetrou yearns to create a different reality again - constructing dreamscapes that fall somewhere between Rene Magritte, Lewis Carroll.(pictured, above right) and Tennessee Williams (pictured, left) Using her children Olympia and Solomon, Papapetrou populates her scenarios as extravagantly as Lewis Carroll once cast his Wonderland for Alice Liddell (a mythology Papapetrou has also previously explored in her photographs) Papapetrou's immaculate photographs are, however, pregnant with enigmatic, sometimes menacing scenarios. The Australian Centre for Photography http://www.acp.org.au/ have presented a retrospective of Papapetrou's personal vision in which the arc of a remarkable career is made visible. The third artist, William Yang, appears to yearn for childhood (pictured, left) his Chinese identity, and love. In "Old New Borrowed Blue" at

Stills Gallery, we discern a quest every bit as intense as t 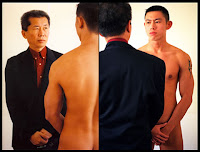 hose of either Stacey and Papapetrou. Yang guilelessly sifts through past and present experience using a kind of GPS of the heart. His homosexuality is unsentimentally realised (pictured, right) as well as the experiences of an Australian childhood (pictured, left) in which it came as a surprise, some years after his birth, to discover he was Oriental by race. There is ruthless honesty and candour to Yang's imagery, as always, whether examining his sexuality, mundane meals he has eaten, faces of past lovers or the memories of childhood. (pictured, left) There are also Yang pictures which sneak up on the viewer, such as a delicately toned B&W close-up, taken in 1992, of a right hand (pictured, right) clearly unmarked by hard labour which, we discover on reading Yang's caption, belongs to the Dalai Lama. Nothing, as Vladimir Nabokov was fond of saying, is trivial. "The divinity lies in

the detail." Yang's pictures can be seen at Stills Gallery - until February 26 Robyn Stacey's works can be viewed at the excellent "Curious Colony .... Wunderkammer" group exhibition at the S. Ervin Gallery http://www.nationaltrust.com.au/properties/gallery/default_Upcoming%20Exhibitions.asp sadly only until February 20. Polixeni Papapetrou's photographs are on show at the ACP until March 12.
A Planetary Postscript ... 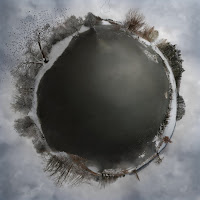 The Australian Centre for 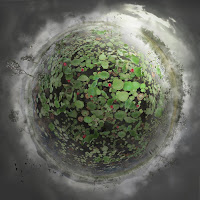 Photography are also showing the first photographs I have seen that made me instantly think of Antoine de St Exupery's epic children's novella "The Little Prince". Catherine Nelson's "Creation" series portrays the world on an unashamedly absurd scale - tiny spheres in which continents have been replaced by green, limpid pools and trees and grass sprout like stubble on a planet resembling a black bowling ball. And yet ... there is still something essentially photographic about Nelson's fantasies and her seductive exploiting of the "anything goes" constructs available to digital photo-artists today. Until March 12.
It's Head On Time Again!
I ran into Moshe Rosenzveig at Jim 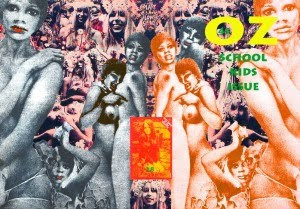 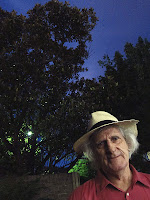 - An Historical Art Trajectory (1970-2010) (pictured) at the Tin Sheds Gallery at Sydney University. It was a emotional reunion at the gallery which featured a visual avalanche of works by Anderson, the former art editor of Australia's pioneering satirical magazine Oz. Anderson is also a passionate diarist with a camera and anyone contemplating a visit to the Tin Sheds http://faculty.arch.usyd.edu.au/art_workshop/Tinsheds.2002.html should allow time to trawl through what seemed like thousands of photographs. There are also many much larger works (pictured, above) whic 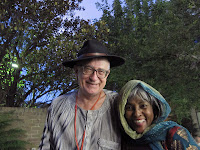 h delineate Anderson's passionate, sensual imagination. I met a number of friends from four decades ago who were present, such as the acclaimed poet Robert Adamson (pictured) pioneering 1960's light show designer Roger Foley (a.k.a. L.S.D. Fogg), with his charming fiance Francesca.(pictured) Rosenzveig, an always passionate advocate for photography, reminded me again that anyone contemplating entering Head On's Portrait Competition should get their entries in soon. Details may be found at http://headon.com.au/ and entries close on March 13, 2011
Copyright Robert McFarlane 2011.

Posted by ozphotoreview at 12:46 AM No comments: