An Epic May Coming in Photography

May﻿﻿﻿﻿﻿﻿ in Sydney shows every sign of promise, considering the Moran Contemporary Photographic Prize http://www.moranprizes.com.au/ winners will be announced on May 3, at an exhibition at the State Library of NSW and the Head On Photo Festival www.headon.com.au/ is also scheduled to flood Sydney with artistic diversity in early May. In th 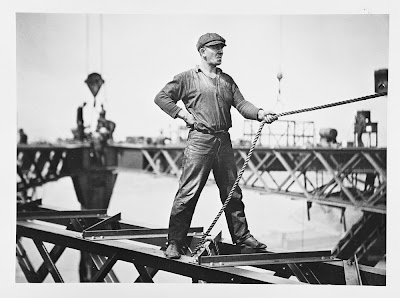 e meantime, I have been absorbed by events in Adelaide, especially a discussion on historic photographers Henri Mallard and Captain Samuel Sweet (pictured, below right) conducted recently at the Adelaide Festival Centre Gallery. Sydney photographer Henri Mallard (1884-1967) readers may know, extensively documented the epic construction of Sydney Harbour Bridge in the early 1930's (pictured) while Captain Samuel Sweet (1825-1886) was an industrious, talented South Australian photographer during the second half of the 19th Century, with, as I found out, an equal enthusiasm for photographing the construction of bridges. The other good reason for attending was that Gael Newton, Senior Curator of Photography at the National Gallery of Australia and distinguished South Australian Curator Karen Magee were to speak, with Newton also opening a compact exhibition

of contemporary fibre-based silver gelatin prints made by the late David Moore (1927-2003) www.davidmoorephotography.com.au/ of Mallard's unsentimental, powerfully realised observations. Visitors to David Moore's website (above) will discover that Moore made some of the most definitive photographs of that huge, single-span structure during his long, distinguished career. Newton and Magee are, respectively, acknowledged experts 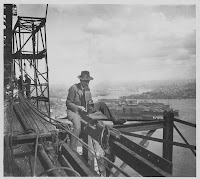 allard and Sweet, and their witty, informed comments were well received by the capacity audience. Newton regaled us with droll revelations about Mallard's known love of all things French. (the photographer spoke with a French accent, affected an appropriately Gallic air, and was commonly seen wearing a beret and sporting a generous moustache) Mallard was, however, French by parentage only, having been born in Balmain, Sydney. Sweet, Magee informed us, was born in Britain, a master mariner before he was a photographer, and shared Mallard's love of great endeavours, photographing such comparatively modest, but important South Australian projects, as the building of Murray Bridge. Much more can be discovered about the master mariner turned photograp

her on Karen Magee's website http://captainsweet.com.au/ His well organised photographs are
populated generously by the many workers needed to make such constructions possible. Both Sweet and Mallard clearly understood the value of labour, especially the remarkably varied skills needed to conquer the challenging spaces between shores. It was noticeable that Newton and Magee's talks were well attended by Adelaide's fine-art photography community - notably Ian North and Gary Cockburn. 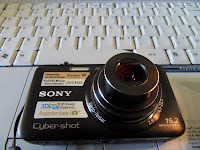 While I was in the Festival Centre complex, with its sweeping views of the South Australian Parliament, I took the opportunity to test a new camera sent from Sony www.sony.com.au/ - their tiny but remarkably well featured Cybershot DSC WX-7. (pictured) Barely larger than a laptop mousepad and no thicker than a pack of playing cards, the WX-7 seems typical of what camera manufacturers are offering consumers today.  For under $300, this camera has 16 Megapixel resolution, a 5x Zeiss Vario-Tessar zoom lens (25-125mm equivalent) with Full HD (1920 x 1080/50i) video recording and full Optical Image Stabilisation, with Sony's proven SteadyShot. 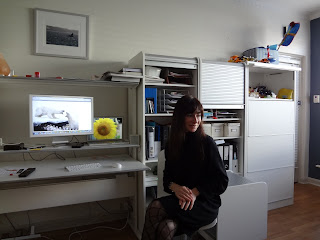 This camera also offers another, increasingly popular feature - Sweep Panorama (pictured, above) which I predict will prove popular with travellers wanting to s 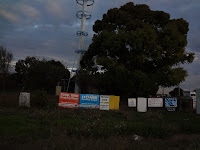 ee beyond the edge of their vision. In this mode (set at the detent between stills and video) the WX-7 automatically, and rapidly, takes a number of images as it smoothly pans in the direction of an arrow which appears on the screen) These exposures are then seamlessly stitched within the camera, creating the panoramic image seen here. There is also a 3D function associated with Sweep Panorama, which sadly, I did not have time to explore. I am sure many will find this an option worth exploring when coupled with their HDTV. Usually I test lenses at their limit, assuming they can only get better from this point on. I made this informal office portrait (pictured, above right) of Adelaide psychologist Michelle Sexton which shows fine rendering of detail with little visible distortion, at f2.6 and at its widest angle - 25mm. Finally, I recently noticed a sign (pictured, above left) by the side of a highway -for an event presumably those interested should have already  known about - a 'psychic festival.' The  WX-7 rendered this scene with great clarity. I hope to soon test the remarkable new generation of advanced compact cameras featuring unusually fast, wide lenses. For those who have used Leica M, Nikon S, Canon VIT and the current generation of Voigtlander Bessa M mount coupled rangefinder cameras, www.mainlinephoto.com.au/  it could prove nostalgic - and perhaps prophetic.
Luke Hardy Returns with "Dragonfly", to Meyer Gallery 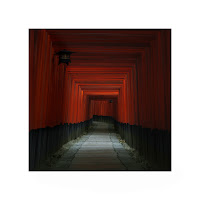 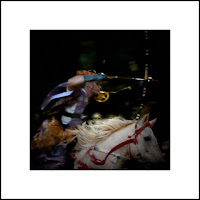 Photographer Luke Hardy, who made such an impact with his Yuki Onna "Woman of the Snow" exhibition at the Meyer Gallery www.meyergallery.com.au/  in 2009, again salutes the power concealed within the ephemeral in "Dragonfly". Anyone who has been transfixed by galloping archers in an Akira Kurosawa film, will understand the Zen lode which Hardy mines in these delicate, resonant colour images. Opening with on May 4 as part of Head On Photo Festival www.headon.com.au/ "New York Photographs 1985-1989" by Julie Sundberg opens the following week (pictured).

Labels: An Epic May in Photography

Return of the Master 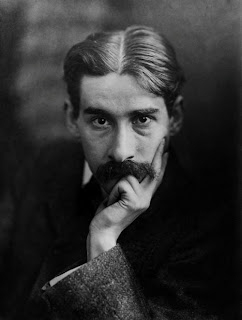 Eight decades after the renowned German-born photographer extensively documented Australia, a tantalizing sampling of vintage works made by E.O. Hoppe - "A Year in The Life of Australia" is at last being seen in Sydney, in Josef Lebovic's elegant new Kensington Gallery www.joseflebovicgallery.com/ When Hoppe arrived in Australia in 1930 to document the only recently federated nation from coast to coast, the intense cameraman was arguably the most famous photographer in the world. Hoppe (1878-1972) was renowned for being able to address both epic and intimate subjects with equal eloquence. He had photographed slums and palaces, poverty and royalty - all with a characteristic intensity and simple, resonant compositions. Portraits of Hoppe around this time reveal a man who regarded any camera - whether photographing with it or addressing the lens in a circa 1920 self-portrait - with an unquenchable passion.(pictured, above) Before travelling to Australia from Europe he was warned that the new country didn't have enough of visual interest to hold his attention for long. Hoppe, however, soon came to terms with Australia's way of life - and work. His photographs captured the sensuality of leisure, the inferences of poverty c 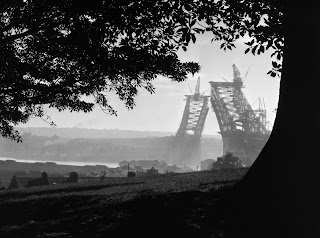 aused by a growing worl 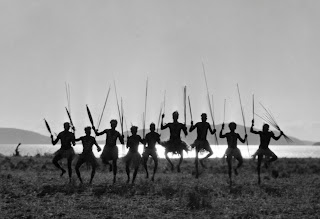 d Depression in the 1930's, and the ironic presence of vast public undertakings - such as the construction of Sydney's massive new Harbour Bridge. (pictured, left) Hoppe also, unlike many visiting observers, recognised the importance of indigenous Australia - making images that were luminous in their unsentimental witnessing of tribal life.(pictured, left) This photographer also acknowledged the cultural importance of Australia's sporting icons, quietly documenting epic Test cricket scores by Don Bradman - handwritten on a humble sign attached the 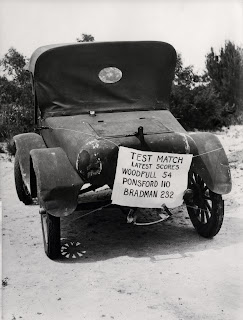 boot of a battered, dusty black car in a remote location. (pictured, right) Curatorial Assistance's www.curatorial.com/ Graham Howe, who discovered Hoppe's extraordinary photographic archive camouflaged under subjects' names and not the photographer's, in a U.K. photographic archive, believes passionately that Hoppe's Australian photographs (which influenced such renowned Australian photographers as Max Dupain www.maxdupain.com.au/JWgallery.htm) should be acquired by an appropriate Australian institution in order to preserve them for posterity. Until April 23
Darren Sylvester wins $20,000 Photography Award

The photographic award season has begun with "What happens will happen" by Darren Sylvester (pictured, left) winning the 2011 Josephine Ulrick and Win Schubert Photographic Award. Judge Shaune Lakin of the Monash Gallery of Art praised Sylvester's work for being "iconic" but also playing down its claims to being iconic by being "humourous, seductive and charming." Lakin also commended Julie Rrap for her work "Outerspace #10" and Geoff Parr for "Spectre". Works from the Award will be on display at the Gold Coast City Gallery http://www.theartscentregc.com.au/ until May 22.
Posted by ozphotoreview at 1:26 AM No comments: